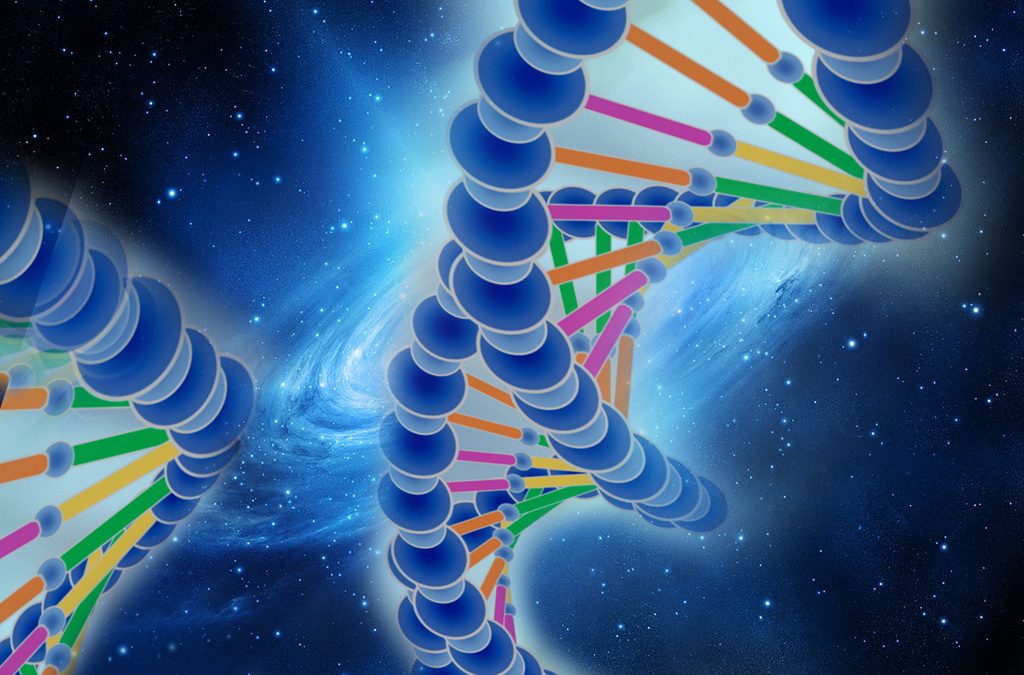 On the Origin of Life: Panspermia and Octopus from Space

So how does life come into being in the third dimension? As we have been told in our text books, primitive life evolved here, but arrived through a type of panspermia through space.

Many people were challenged by news reports in May 2018 that suggested Octopus came to Earth from outer space, via a comet. As far-fetched as these reports appeared, they were citing a peer-reviewed article by Steele et al. (2018) published in Progress in Biophysics and Molecular Biology[1], which presented evidence in support of panspermia (a theory suggesting life exists throughout the universe(s) and is capable of colonizing new environments).

Steele et al. review some of the original research in panspermia, including that performed by some of their co-authors. Indeed, one of the co-authors (N. Chandra Wickramasinghe), along with Fred Hoyle, coined the Hoyle-Wickramasinghe (H-W) Thesis of Cosmic (Cometary) Biology in the 1970s. This is the thesis (or theory) being ‘tested’ in their review. They argue that there is a mounting body of evidence that either supports or is predicted by the H-W or “cosmic origins” theory of life on Earth. 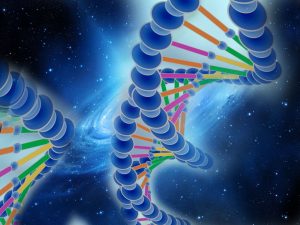 In simplistic terms, the cosmic origins theory presents that at least some of the genetic diversity we see on Earth has originated from elsewhere (travelling to Earth on celestial bodies such as comets; Key 402 v. 303[2]). That is, primitive life originated from an off-planetary source (playing a key role in the terraforming of Earth; Key 402 v. 302) but subjected to evolutionary processes according to local planetary conditions. We can then see our biome as not just limited to spaceship Earth, but as a greater cosmic biome (or cosmic gene pool). Indeed, the concept of an open-ended universe, mind and universal image (going beyond the limited boundaries of our immediate ‘universe’) is an important concept in The Keys (see Key 101-102-103). The cosmic origins theory challenges the ‘terrestrial paradigm’ (that life originated solely on Earth, e.g. in warm pools) head-on. In many ways, this paradigm perpetuates the thinking that the Earth is the centre of our universe, essentially the ‘be all and end all’. It also entrenches the view that we are unique, and that the beginning of life was a random accident that only happened here.[3]

Note that whilst Key 402 states Darwinian evolutionary processes do occur on Earth (such as with Darwin’s Finches on Galapagos, with limited spatial and temporal scales), it states that primitive life did not evolve into the complex life forms we see on Earth today. Rather, The Keys describes the integral role of the biblically referenced Elohim and B’nai Elohim in the creation of various life forms throughout the universe. For example, Key 402 v. 411 states Life did not evolve from any singular planetary sphere exclusively by factors of Darwinistic evolution, but instead through the Light lattice established behind Creation which is superimposed by a greater Creation. For this reason, building a picture of the evolutionary history of the Earth is flawed if only examining the fossil record (the difficulties of only using the fossil record are well demonstrated by the complicated and confusing ‘bristly bush’ of the human evolutionary tree with its various genesis points over time). Importantly, The Keys (e.g. Key 402 v. 296) states that our genetic blueprint is not a happenstance creation from the chemistry of the Earth but articulated from a Higher blueprint (the Adam Kadmon).

Panspermia does not necessarily attempt to address the question of how extraterrestrial lifeforms originated (on other planets). Steele et al. argue that the coming together of biological monomers (e.g. amino acids, nucleotides) into a primitive cell capable of further evolution was too unlikely to have happened in the time frame of the Earth (4.5 billion years), but plausible if you consider evolution in terms of a cosmic biome and over the time frame of the universe (14 billion years). However, if scientists were to consider that the structure of amino acids being brought together was not a random process (Key 401 v. 266), they may be able to see beyond statistical arguments on the likelihood of (or mechanism involved with) the formation of life. What most scientists lack is the realization that matching and linking elements together for life is not a random process, but a coded process based on mathematical vibration and the WORDS (Vibrational Codings of the Logoi) which order both small and large biological molecules, such as polypeptides (proteins) made from the myriad amino acids, including the 20 basic types (10+10) used as building block monomers for life that are also to be found in outer space…(Key 402 v. 297). The Keys states that primordial proteins and nucleic acids exist throughout space, and that planets are terraformed according to the life forms planned for that system (Key 401 v. 268 & 322). In other words, Consciousness exists behind the creation of Life, rather than life simply being the by-product of a chemical soup that has the right ingredients at the right time.

Codes of life in space

As articulated by Steele et al., it seems like every month more and more Earth-like planets are being found that seem capable of supporting life. In addition, Steele et al. provide examples of how water (or at least the evidence of hydrological processes) is being found on comets and other icy solar system bodies such as Mars. This is important (especially for their cosmic origins theory), because liquid water is a prerequisite for life. Water is a ‘proton acceptor’ used to assist the formation of the nucleobases, the fundamental structure of RNA/DNA (Key 402 v. 412). Water also carries the codes of Life (demonstrated by the pioneering research of Luc Montagnier) and could be considered a medium or carrier of memory and consciousness (Key 401, v. 299). Aside from water, the medium of life, Steele et al. also describe how, using increasingly sophisticated remote sensing equipment, we are starting to detect organic molecules in space and ‘biological signatures’ on interstellar bodies, as have recently been discovered on Mars[4]. For many people, however, the question of whether there is life in space will not be answered until the evidence is in plain sight.

We are also starting to build a much better understanding of the molecular processes associated with Darwinistic inheritance (‘vertical’, between generations), and a wide variety of Lamarckian-like inheritance mechanisms (‘horizontal’, within generations) such as where lymphocytes deliver retroviruses and somatic genes to the germline (as reviewed by Steele et al.). We are also building a much better knowledge of how viruses can drive mutagenic processes and change the structure of RNA/DNA. Whilst evolutionary biologists dismissed Lamarckian evolution long ago, advances in this field (including epigenetics) demonstrate how a minimal inherent Lamarckian adaptation does occur in nature (Key 401 v. 249).

Let’s now turn to the Octopus, which has a ‘highly inconsistent and confusing’ evolutionary history according to Steele et al. Most readers would be familiar with a tree-like diagram that shows the evolutionary relationships between species. The closer two species are on the tree, the more similar they should be. Modern-day cephalopods (to which Octopus belong) have certain features, such as a large brain and a sophisticated nervous system, which appeared quite suddenly on the evolutionary tree next to its ancestors. In addition, members of the Octopus family possess a specific molecular genetic strategy (transcriptional modifications) whereby nearly all protein-coding genes show Adenosine-to-Inosine (A-to-I) editing sites in their mRNA[5], but not its ancestor, the nautilus. From an evolutionary point of view, this is significant because it is thought to allow for the repair of defects in gene sequences. Normally, this molecular strategy arises incrementally along an evolutionary line, rather than the instantaneous jump upward seen in Octopus. This (and other data) led Steele et al. to assume that the complex features seen in Octopus could not be explained by neo-Darwin or Lamarckian theories of evolution. Instead, they proposed that crypto-preserved Octopus eggs could have arrived on icy bodies, around the time of the appearance of these species on the evolutionary tree on Earth. The same could be said for the plant seeds too. Of course, the conditions must be right on Earth for those organisms to flourish.

Because the H-W cosmic origins theory involves genes arriving on celestial bodies (meteorites etc.), periods of the Earth’s history with a high incidence of meteorite impacts are predicted by Steele et al. to be periods of change in species composition (extinctions and new species introduced into the fossil record). Such a period of impacts and resultant species composition change occurred with the ‘Cambrian Explosion’. Note that extinctions can also occur very rapidly as a consequence of changes in the Earth’s magnetic cycles, set in motion by cosmic oscillations (Key 304).

Steele et al. review recent findings that viable microbes were found to exist in the stratosphere, about 30-40 kilometres (18-25 miles) above the Earth. Whilst some of these could be accounted for from upwelling from the ground, or contamination of the equipment used to study them, some could not. Steele et al. concluded it is plausible these microbes came to Earth via micron-sized meteorites or icy comet meteors about 1 meter in diameter. They postulated that during solar storms, these microbes could be propelled towards the surface of the Earth. Accordingly, the authors encouraged biologists to examine the apparent correlation between viral epidemics and the sun spot flare cycle (such as for influenza epidemics), where it is suggested that solar activity could assist in the descent of ‘charged molecular aggregates’ (including viruses) from the stratosphere to the ground along magnetic field lines.

As a core feature of the cosmic origins theory, Steele et al. proposed that viruses from the cosmos contribute to evolution on Earth (a ‘retroviral induction model’). They stated that viruses and their elements (e.g. reverse transcriptase enzymes) appear to be important viral-drivers of evolutionary genetic change on Earth, i.e. horizontal gene transfer (integrating their own genetic material into the genome of the infected host). The authors proposed that the Earth was seeded with sophisticated viral gene vectors, including at the time of the Cambrian Explosion, where genetic diversity increased many-fold.

In conclusion, Steele et al. stated…we came from space, we are made of viral genes, and eventually our evolutionary legacy would in full measure return to space. This is not entirely inconsistent with The Keys of Enoch, for The Keys states how we will understand our true identity is not Earth-bound, but from a Higher blueprint, as we go from Homo sapiens sapiens into Homo Universalis in the Father’s House of Many Mansions. We will come to the realization that –

Life is throughout the Cosmos – we are living in a Living Cosmos with abundant life – functioning on multiple dimensions of existence and throughout spacetime.