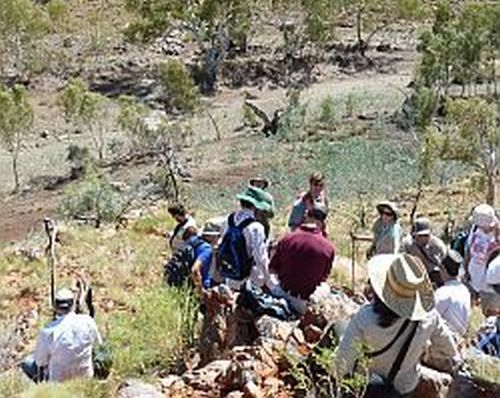 UW–Madison geoscience researchers on a 2010 field trip to the Apex Chert, a rock formation in western Australia that is among the oldest and best-preserved rock deposits in the world. COURTESY OF JOHN VALLEY

Did life begin on Earth much earlier than expected?

Fossils, so small that they cannot be seen with the naked eye, are indicating that life may have begun on Earth much earlier than previously thought.

Scientific convention has long held that for an extensive period in its early history, Earth was inhospitable to life, with its surface consisting of boiling hot liquified magma and being prone to volcanism and violent bombardment from outer space. The initial half billion-year period of Earth’s existence was thought to have been so inhospitable to life that it is named the Hadean period referring to Hades, the Greek underworld. However, geological records now seem to point to Earth having cooled sufficiently for a crust to have formed by 4.4 billion years ago. Additionally, in his research using a specialised secondary ion mass spectrometer (SIMS), John W. Valley, professor of geoscience at the University of Wisconsin-Madison, examined zircon crystals in an ancient, well-preserved rock deposit, the Apex Chert, in Western Australia and found that oxygen isotopes within it suggest the crystals formed from material that was altered by liquid water. This would mean that water, which a necessity for organic life, was present on earth 4.3 billion years ago, much earlier than previously theorised. Our understanding of the earth from 4.4 – 3.5 billion years ago, thus may now have to evolve to it being more Edenic, viz. more temperate than expected and able, at least. to sustain primitive life forms.

The definition of ‘life’ is complex and controversial. It is generally agreed that to be defined as ‘living’ an organism must demonstrate some form of each of the following characteristics: organisation, metabolism, homeostasis, growth, reproduction, response and evolution. While non-living structures may demonstrate some of these, only organisms defined as living meet all of them. Leaving aside such thorny questions as whether viruses can be defined as having life even though they do not have all these characteristics, unicellular bacteria are described as ‘living’ because they do. Living organisms also leave behind fossils with carbon or sulphur isotopes that point to present or past metabolism. Microfossils found in a piece of rock from the Apex Chert have been shown to have formed about 3.5 billion years ago, and, with some having the same carbon-isotope ratio as modern photosynthetic bacteria and some the same ratios as methane-eating or methane-producing microbes, they are currently believed to be evidence of some of the earliest life ever formed on Earth.

An example of one of the microfossils discovered in a sample of rock recovered from the Apex Chert. A new study used sophisticated chemical analysis to confirm the microscopic structures found in the rock are biological. COURTESY OF J. WILLIAM SCHOPF 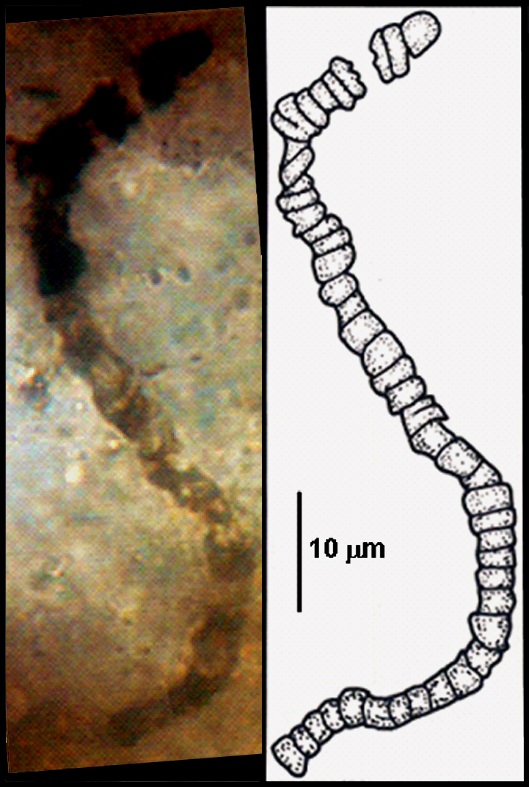 These fossils were originally described in Science by J. William Schopf, professor of paleobiology at UCLA, in 1993. Schopf and his team argued that they were organic in nature, however, his initial claims were disputed, with critics claiming that they were formed during nonbiological processes. Now, as published in the Proceedings of the National Academy of Sciences, the new study describes 11 microbial specimens from five separate taxa, linking their morphologies to chemical signatures that are characteristic of life. Our distinction between living and non-living may need to be broadened as we explore more of our universe, but Schopf is claiming that studies like this indicate that life could indeed be common throughout the universe. This discovery however, is of major importance for Earth because, as several different types of microbes were shown to be present 3.5 billion years ago, it tells us that “life had to have begun substantially earlier — nobody knows how much earlier – and confirms it is not difficult for primitive life to form and to evolve into more advanced microorganisms.”[1]

In another study by an international team from University College London, microbes in sedimentary rocks from the Nuvvuagittuq belt in eastern Canada were established to have lived 3.8 billion to 4.3 billion years ago. The resulting scientific paper, Evidence for Early Life in Earth’s Oldest Hydrothermal Vent Precipitates by Matthew Dodd and Dominic Papineau et al of UCL Earth Sciences in London, was published in Nature and claimed that the microbes were formed by bacteria that oxidised iron to produce energy. Similar bacteria exist in our oceans today near hydrothermal seafloor vents. Extensive chemical and physical examinations were conducted on the microscopic tubes and filaments during which it was found that the microfossils, which are composed of the iron oxide mineral haematite, have the same branching structure as modern bacteria living near hydrothermal vents, and that carbon and calcium minerals that accompany fossils in younger rocks were also present. The scientists involved in the study are certain that these microbes are evidence of some of the earliest life on Earth.

Furthermore, in Greenland, which contains some of the oldest rocks on the planet, stromatolites or fossilized microbial mats have been found dating back to 3.7 billion years ago. Stromatolites typically form by the baffling, trapping, and precipitation of particles by communities of microorganisms such as bacteria and algae.[2] From these studies it is becoming apparent that Earth’s environment in all probability became habitable for primitive life forms not long, at least in geological terms, after her formation (believed to be about 4.5 billion years ago), but also that life emerged far earlier than believed and that there was a rapid diversification of the emerging life forms.