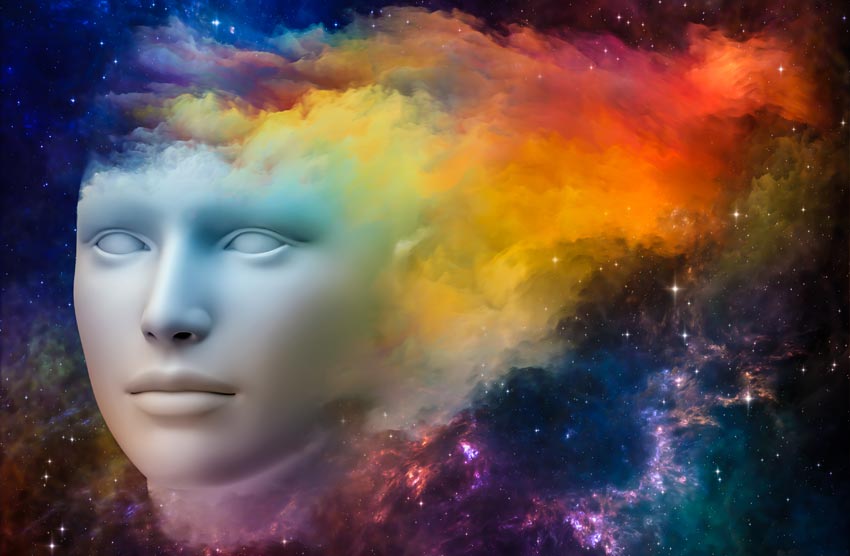 Working towards an end to suffering we need to discover our limitless mind. To see our mind as a small microcosm, we need only to reach out into our local environment through the subtle currents and fields of energy, to allow one vibrational dimension to interface and communicate with the whole.  This implies that, through a greater consciousness network, we can gain access to information around the world, even to different consciousness universes. When we begin to understand how to start the process, we discover that our minds are omnidirectional. Understanding our interconnectedness releases us from our limitations and makes us part of the greater totality.

What was once the greatest mystery of biology, the human body, is gradually yielding its secrets. Humanity is more than flesh; it is a continuous transducer or “biotransducer” of energies which can transform our thoughts into both positive and negative events in life.  Francis Crick, one of the discoverers of DNA, in his later years urged us to focus on neural mechanisms underlying awareness. Similarly, the body of humanity has been seen by thinkers like Karl Pribram as a bio-hologram of energy quanta.1

According to The Keys of Enoch®, humankind’s physical incarnation and finely knit embodiment is the bridge needed between worlds of higher and lower intelligence.2 With higher levels of information, humankind enters new horizons beyond being a highly evolved animal seemingly into open and apparently endless frontiers. We believe this comes through a higher consciousness attunement to new levels of information beyond the normal three-dimensional realm. This can be understood via a new notion of active information being fed into the mind-body. Likewise, several centuries of development in physics and mathematics have taught us that information is a crucial player in physical systems and processes of life.  According to our research, it is important to regard the physical world and its players (incarnate beings) as made of information that comes from a higher source, with energy and matter as hardware and software for the power of life!  This is a crucial understanding of information evolution from above, not below.

There is some evidence that the human brain functions as a hologram with regard to long-term memory, with holographic organization shifting from higher impulses to the slow potential micro-structures that develop in the post-synaptic networks. The importance of the holograph is that the “whole is in every part”, where “image constructions” of superconsciousness can also become known (see The Keys of Enoch®)

Superconsciousness involves realms beyond our space-time. Ultimately, the total alignment and resonant attunement of the bio-matrix of the whole body is seen as part of the all-pervading field of the Plenum of space that determines the quality and degree to which we will experience the holistic field. One of the most important new concepts is that of “Implicate Order”, which Bohm illustrated as a vast working hologram. Bohm claims that it applies even more obviously in domains such as the biological, especially in cognitive processes and consciousness experience.3

What is exciting about all of this is that scientists are becoming more aware of theological implications in recognizing that evolutionary mechanisms are not simply the neuron or cellular resonance couplings of a few milliseconds expressed in amps, ergs, or teslas of energy, but issue forth not from a hierarchy but a holoarchy of fuller Life processes. This might mean that higher frequencies of Light and lower magnetic fields work together to stimulate creative awareness, as well as energize superconsciousness. Already science has seen in some basic forms of plant life how mutations attempt on their own to correct themselves.

As seen from the spiritual side of philosophy, this energy geometry is only one in a vast system that we are involved with and which owes its origin to a divine process. This sacred geometry is connected with what we call the ‘Higher Evolution’ and, understanding this, we can move beyond the happenstance phenomena of science. Whether it is superconductivity or nuclear evolution, it is all derived from a harmonious divine energy quantum — projecting, creating and discovering “itself” through the human instrument of birth and life.

Ultimately, the whole human DNA can be reprogrammed by consciousness that has self-realization. Even for those who do not creatively attach their soul to a “higher self” during a lifetime, with death in a state of non-equilibrium, life in some form is still maintained and proceeds in a line of progeny after its material form changes with new birth.

What emerges is a multi-body transduction model of various life systems that are interconnected.  At the point of death, all the essential information modulating the carrier waves of existence is transferred to the carrier wave, and the soul is absorbed into the next plane of existence within the Divine program. Unless a person dynamically unites with the consciousness awareness of the greater Tree of Life, they cannot experience the many worlds in this life.

We, thus, assert that life is a function of the flow which at the highest level is called Love, that is represented as a higher resonance that allows for varying degrees of admittance into the bio-lattice. Thus, the experience of Love or lack of Love at any moment can be understood within scientific principles that bring resonance of the fields into sharper focus and that become rationally comprehensible.

We are part of a supra-consciousness realm where facts and objects are universally connected.  In this space through synchronicity, the past, the present and the future exist simultaneously. The mechanism may be a type of hologram, but it is a universal network of consciousness where which we have already reached the threshold of the Noosphere revealing itself and the Infinite Pathway.