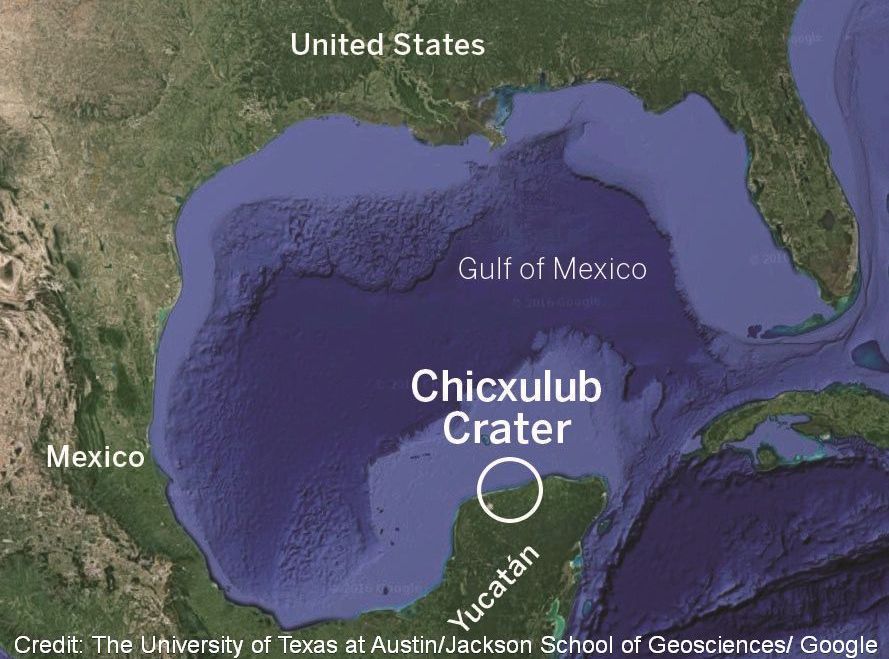 The Adams Event and the Demise of the Dinosaurs

Forty-two thousand years ago during what has been dubbed the ‘Adams Transitional Geomagnetic Event’ (Adams Event), our planet experienced a catastrophic strike by an off-planetary object and a massive change in conditions that led to the total demise of, among many other life forms, all terrestrial dinosaurs. The naming of this period that was also the beginning of the rise to prominence of mammals, is a tribute to science fiction writer Douglas Adams, who wrote in The Hitchhiker’s Guide to the Galaxy that the answer to life … the universe … and everything … is 42!

The Chicxulub crater under the Gulf of Mexico, has been widely researched as the site of the infamous impact, with scientific research and opinion divided as to whether the impactor was a main-belt asteroid or a sun-grazing comet. Then in Science Advances, on February 24, 2021, it was announced that a multi-institutional team had found asteroid dust containing the element iridium in the crater, almost certainly deposited at the time of the strike. Iridium is not common in the earth’s crust but is found in elevated levels in certain types of asteroids. The iridium found throughout the world at the geological level dating from the extinction period was what initially gave rise to the asteroid theory. It was believed to have been carried and deposited throughout the world as part of the dust generated by the asteroid strike that was so detrimental to the ill-fated dinosaurs. Finding iridium in the core appears to indicate conclusively that it was in fact an asteroid that created the Chicxulub crater and led to the mass extinction 42, 000 years ago.

However, a study published in Science, February 18, 2021, concludes that the cause of this extinction of two thirds of the earth’s megafauna and flora was two-fold. Scientists have long been aware that there was a magnetic field reversal on our planet 41-42, 000 years ago, known as the Laschamps Excursion but they have only just been able to establish the actual timing of the event and its real effects on the earth’s environment.

During the 800 years of magnetic pole reversal, the earth’s protective magnetic field was greatly weakened − to about 28% of its current strength, which markedly changed climatic conditions and the environment. Scientists studied the rings of ancient New Zealand kauri trees preserved in sediment for 40, 000 years, and found they were able to categorise a spike in atmospheric radiocarbon levels resulting from the collapse of Earth’s magnetic field. One giant tree from Ngāwhā, New Zealand was so well preserved that even the bark was still intact, providing the research team with a solid source for their studies. The data was compared to previous records from ice cores which suggested that solar activity was also at a minimum at the time. The weaker magnetic field combined with minimal solar activity would have given rise to extreme climatic changes and catastrophic effects on megafauna.

The study found that in fact the greatest effects were experienced during the period leading up to the reversal while the poles were still haphazardly migrating across the earth during the Adams Event. During this prelude to the reversal the magnetic field was virtually non-existent (0-6% of current strength) meaning that there was no protection from cosmic ray and solar flare bombardment. The ozone layer was destroyed, leading to intense climate change, earth-wide aurora phenomena and intense lightning storms. Combined with minimal solar activity and the dust from the Chicxulub event, the fate of the dinosaurs and other megafauna was sealed.

Some scientists have speculated that this might have played a part in driving many of the existing humans into caves for protection as well as contributing to the demise of the non-cave dwelling Neanderthals. It is interesting to note that there was a marked increase in cave rock art in Europe, Australia and many other parts of the world during this period, as well as an indication that red ochre was used as a sunscreen, a practice which continued for millennia and is still found in certain tribes today.

While humans who sought shelter in caves survived the changes, the weakened magnetic field, lower solar activity and dramatic climate change brought about by the magnetic field reversal coupled with the results of the impact of the massive asteroid, meant that the large bodied, land-based dinosaurs and two thirds of mega fauna upon the earth were unable to sustain themselves and they starved and were completely destroyed in a very short period of time.

There is concern among scientists that humanity’s reliance on fossil fuels, which is dramatically increasing the amount of carbon and other greenhouse gasses in our atmosphere, together with the weakening of earth’s magnetic field and the beginnings of a magnetic pole reversal will initiate a similar period of intensely destructive climate change with mass extinctions. In fact, many believe that the process is currently well underway.