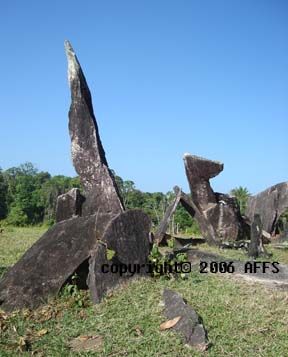 You’ve heard about Stonehenge and Woodhenge. You may also have read about stone circles in southern Egypt and Miami, Florida. Now Brazilian archaeologists have found a well-defined ancient stone structure on a hill top in the Amazon. Specifically, this amazing discovery is located in the state of Amapá in the northern reaches of the Brazilian Amazon. Could primitive Indians living in the jungles of the Amazon have constructed this site? Archeologists also encountered fragments of pottery at the site which have been dated as 2,000 years old.

Anthropologists, as well as reports from books such as Karl Brugger’s The Chronicle of Akakor, tell us that thousands of years ago an ancient civilization lived in South America. This astounding find of 127 megalithic granite blocks confirms their theories. Some of the stone blocks, still standing, are up to 3 meters (9 feet) tall, distributed at regular intervals in a circle, a perfect geometry for astronomical alignments.

The way the blocks are positioned and firmly placed in the ground clearly indicates that this was once a very sophisticated observatory. The head archaeologist Mariana Petry Cabral, of the Institute of Scientific and Technological Research of the State of the Amapá (Iepa), said that the monument has been known by the local population for many years. Although dates can be controversial, this is quite obviously an artifact from an era of pre-European colonization. It may be the oldest and best preserved observatory in the Western hemisphere. Brazilian archeologists have already determined that the circle pinpoints the winter solstice, the day when the sun is at its lowest in the sky.